It all started with me going to Texas with my daughter Kelly, her husband Henry and my two granddaughters and my little Shih Tzu Pookey. Pookey stayed all week at my son David’s home in Texas while I stayed in a motel in a near by town because the motel didn’t allow dogs, not even cute tiny ones. David has four dogs, three cats, and Kelly had her two dogs there also. It was way to much for my little Pookey plus the fact that she got loaded with fleas from the sand in my sons back yard. His wife Betty wanted me to give Pookey to her permanently. Are you kidding, that flea ridden yard would kill Pookey in a week, no way!

The trip started out to be a bit traumatic for her but did get better as the miles went by. Pookey was standing up on her hind legs with her paws on the window watching other cars pass us. When others in passing cars saw her little face they would laugh and wave at her. Then after our week long visit we went back home to Kentucky and Kelly made the choice to go back to Texas and stay, make it her home. Pookey loves Kelly more than anyone else in our family, yes, even more than me.

I gave Kelly my loveseat to take with her to Texas, it was Pookey’s little couch too.
She would sit on the back of it every day and look out the big windows behind it at the birds eating from the feeder and at all the neighbors dogs that come in and out of our back yard, and cats. She didn’t know where to sit in my living room after the loveseat was gone so I bought a new loveseat.

Every day she sat at the sliding door that goes into Kelly’s house and made little sad noises. Not a cry, not a whine, just little sad noises, all day.
Another week went by and I noticed her hair was gone from around both her eyes. The reason you wouldn’t notice it right away is because her hair on the top of her head is long and almost covered her big brown eyes.

A few more days went by and Pookey seemed to be getting worse. The skin around her eyes formed a crusty kind of mess and her nose was runny, she looked terrible!
The following day I took her to the vets and he said the cause for her condition was anxiety, stress, and missing a family member that she loved, that’s what his diagnosis was.

He also said some dogs will get sick to the point where they will die when a person they love dies or moves away. He prescribed some meds and put a protective neck collar on her.

How we get her to take her pills is to put them in a small amount of peanut butter on a spoon, it works great and peanut butter is good for dogs.

Pookey no longer wears the cone, her hair is growing back, her eyes are clean and bright and her eyelashes are slowly growing back. It did give me a scare and I hope to never go through anything like that again.

With Kelly and the granddaughters gone I could see that I couldn’t take proper care of Pookey by myself. I sent out a couple of emails to close friends that I thought might take her and sure enough Leah my closest friend that I had hoped would take her called me right after the emails went out and asked me if I was really wanting to give Pookey away. The good thing was Pookey already knew this friend from her visits to my home so that helped when I had to say good by to Pookey. It was a painful and tough decision to make to give her away.

She is really happy with her adoptive family. She has more people around her all the time, mom and dad, grandma, grandkids, and others popping in and out of there home.

She actually gets out of the house and goes places like shopping, getting ice cream and to visit family friends. When she was with me she only got out on my deck. All and all it was a very good decision I made. The picture below is her on her way to McDonalds.

An update: Pookey died two months ago of old age, she was loved and had a good and happy life.

I Can’t Believe How They Fuss Over Their Pets

That’s me saying it and that’s how I use to feel. I’d see these women falling all over their little dogs or their cats and think, get a life. I had cats off and on, no dogs. My kids had the dogs and they took care of them. I never fussed over my cats. I fed them, made sure they got their shots and that was it, no more, no less.

It started out with me wanting to go to a junk shop to buy a small cabinet for my kitchen. Three of these kinds of shops were right near my home and that’s where I wanted to start out, but my daughter was sure I needed to go out of town to this big new second hand shop that sold everything and that’s where we went.

It was not a junk shop, it was a huge building with booths along the walls and in the center of the room selling products of everything you could possible need from hunting gear to fancy china, but no cabinets like the one I had seen days earlier at a shop in our little town.

Their was a booth with several people standing in front of it so we couldn’t see what they were selling, what the big attraction was. When we got down to it, their she was sitting in the corner of a big wire cage. A tiny cream colored curly haired with little brown ears Shih Tzu. She had a little black button nose and big brown eyes, she looked like a little stuffed toy dog.

Since I’m sitting in a wheelchair I’m eye to eye with her. She just sat straight up looking directly at me, not moving, not even blinking, so tiny and white and fluffy. There was a small tag on the cage with the price, $400.00. That’s an unbelievable price for a Shih Tzu.

My daughter and granddaughter were looking at me very thoughtfully, trying to read my mind. I looked up at them and said if, and I’m just saying if. I didn’t get another syllable out of my mouth and they were jumping up and down and softly screaming like three year old’s. Telling them to calm down I finished my question, will you promise to help me take care of her?  you know I’ll need lots of help ? Oh yes yes yes, we promise we promise we promise.

It was even worse than that, you’d have to have been there to get the full picture.

We live in a nice house with a mother in-law apartment attached right on the back where I reside. It would be no problem for my family to be a part of Pookey’s life and  they could help me when needed.
So now I’m one of those women that’s a mess over her pup, I don’t know how I managed to have lived without her.

About a month after I got her, which would make her just 4 months old, my daughter and son in-law were in my room playing with her on my bed and Kelly, my daughter was eating frozen grapes and let my pup play with one. Shortly after giving it to her to play with, Kelly started looking for the grape seemingly quite concerned about the situation. I didn’t understand why she was so anxious about it until Henry explained that  grapes make dogs very sick and since Pookey was so little it could cause her to die. My pup did eat the grape.

The next day which was a Friday, my daughter Kelly left her job early because she and her husband Henry were leaving town for the weekend on a trip to Texas.
My granddaughters were still in school, and my pup was lying on the floor near my feet close to death.

Her eyes were half shut, she was panting, her little black botton nose was  dry with white stuff on it, and her little little tongue was hanging out of her mouth. I couldn’t do anything. I could not run to the neighbors, could not get her to the vet, could do nothing as I’m in a wheelchair, all I did was look down at her while crying.

The phone rang, it was my older daughter Val and she was on her way to her office.
She works for an online business that sells a very special kind of dog food. Through sobs of tears I told what was going on and she stated she was minutes away from her building and she would have the girls that work there and that help people on the phone through crisis with their pets. She would have the girls call me right back.

They did, they told me to get cooked rice, syrup, and ice cubes. Amazingly I had all three of these things on hand. Rub her mouth with the ice, put the syrup on my finger and then rub it on her tongue. Then put the cooked rice piece by piece in her mouth, more ice, more syrup, more rice, and so on. I also added chicken soup to the menu.

They said when they call back later to check on her she should be fine, she was ! In less then an hour, she was running, jumping, and playing, I couldn’t believe it.

They made the poster of her that you see above this story that says,
“Thank You For Saving My Life” and hung it on there office wall because it’s a testimonial to their work over the phone and because she is such a beautiful little pup.

Use The Power of The Sun!

Nestled in the memories of many a child of the 1970’s is the memory of tea brewing in a glass container out in the open sunshine. This delightful brew was known far and wide as sun tea. Many of us delighted in being the ones who would prepare the tea jug and then search for the perfect spot in the back yard, where the tea would receive direct sunlight and slowly brew into a delightful concoction that we would enjoy with our lunch and dinner that day. 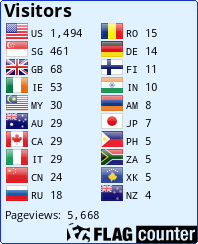